Almost 15 years ago, Star Wars: Knights of the Old Republic, the game many of us hold close to our hearts, was launched. The sequel to KOTOR, KOTOR II: The Sith Lords launched two years later in 2005. Both of these games, unsurprisingly, remain popular today, over a decade later.

Many believe that one of the reasons for their insane success is the ability to use cheat codes (console commands), these spice up gameplay and allow players to play the game the way they want it to be played. This article will show you how to enable the console in both versions of the game, how to open it, and how to use it (with an example). Use the links below to jump to a specific part, if you don't need to know everything:

How to Enable the Console in KOTOR 1 and 2

Unfortunately, there's no in-game option to enable the console in KOTOR 1 or KOTOR 2, but it can be enabled pretty easily by adding a line to a configuration file. In both versions of the game, the process to enable cheats is almost identical.

First, make sure KOTOR is closed before continuing. If you're using Steam on PC or Mac, go to your library, right click 'STAR WARS™ Knights of the Old Republic™' (or for KOTOR II, the equivalent), click 'Properties', then click the 'LOCAL FILES' tab at the top of the newly opened window, and finally, press the 'BROWSE LOCAL FILES...' button to open your game files. The process is pictured below:

If you're not using Steam, navigate to the folder that you installed KOTOR or KOTOR 2 within. For KOTOR 1, this is usually in the 'LucasArts' folder that can be found somewhere in 'Program Files' on Windows. For Mac (via Finder), the location is usually 'Library > Application Support > Knights of the Old Republic'.

After opening the game files, if you're using KOTOR 1, you want to open the file 'swkotor.ini' with Notepad or any other text editor. If you're using KOTOR 2, the file you want to open with Notepad or another text editor is 'swkotor2.ini'. These files are located in the main game folder (i.e. the one that opens when you click browse local files from Steam). If the file isn't opening with Notepad when you double click it on Windows, right click the file, click 'Open With', and select Notepad from the list of applications.

Once you've got the swkotor.ini or swkotor2.ini file opened, scroll to the '[Game Options]' line (usually about 40 lines from the top). Add a new line below '[Game Options]' and add the following text: 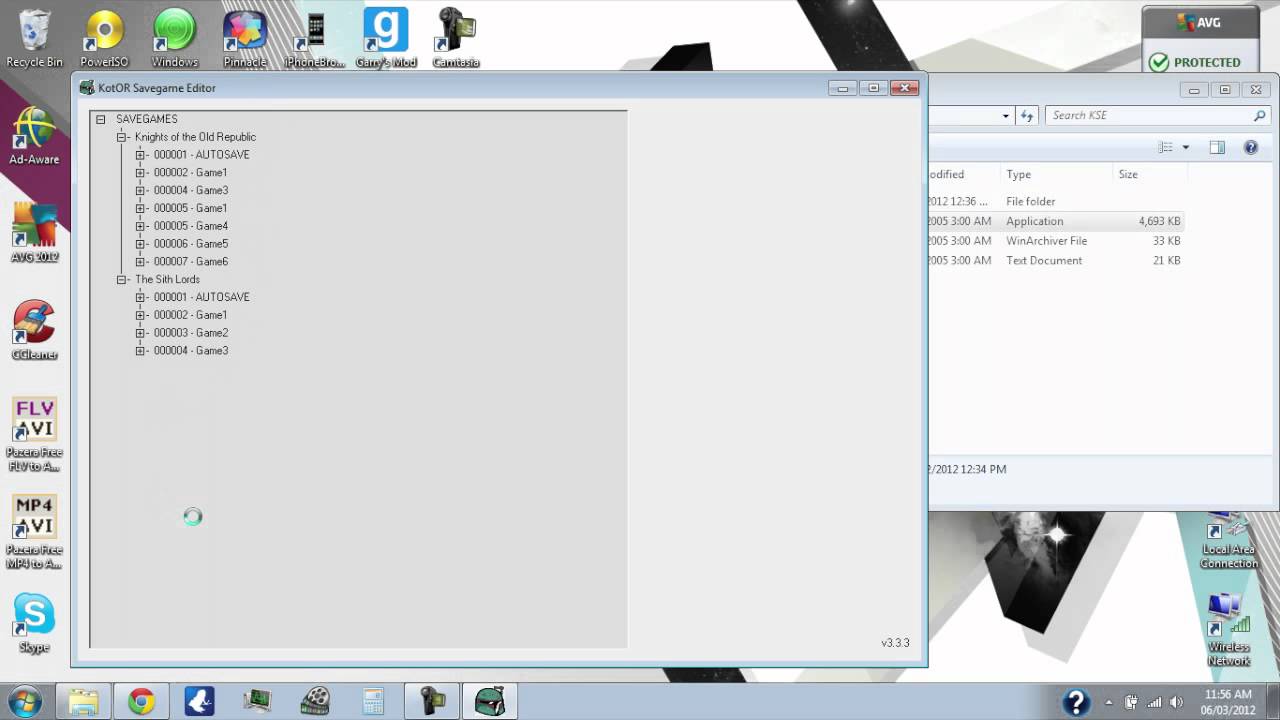 After adding that line, that part of the file should look something like this:

Save the file, close it.. and you're done! You can now open up KOTOR or KOTOR II and use the console. Note that in KOTOR 2, the console is invisible (it still works, you just can't see it). Read below for help opening and using the console.

How to Open the Console in KOTOR 1 and 2

Kotor Save Editor For Mac Shortcut

Simply press one of the following hotkeys (varies based on your keyboard layout):

If these hotkeys aren't working for you, send us a Tweet @ConsoleCMDs, or email us at [email protected] (include your keyboard layout if you know it), and we will try to help!

How to Use the Console in KOTOR 1 and 2 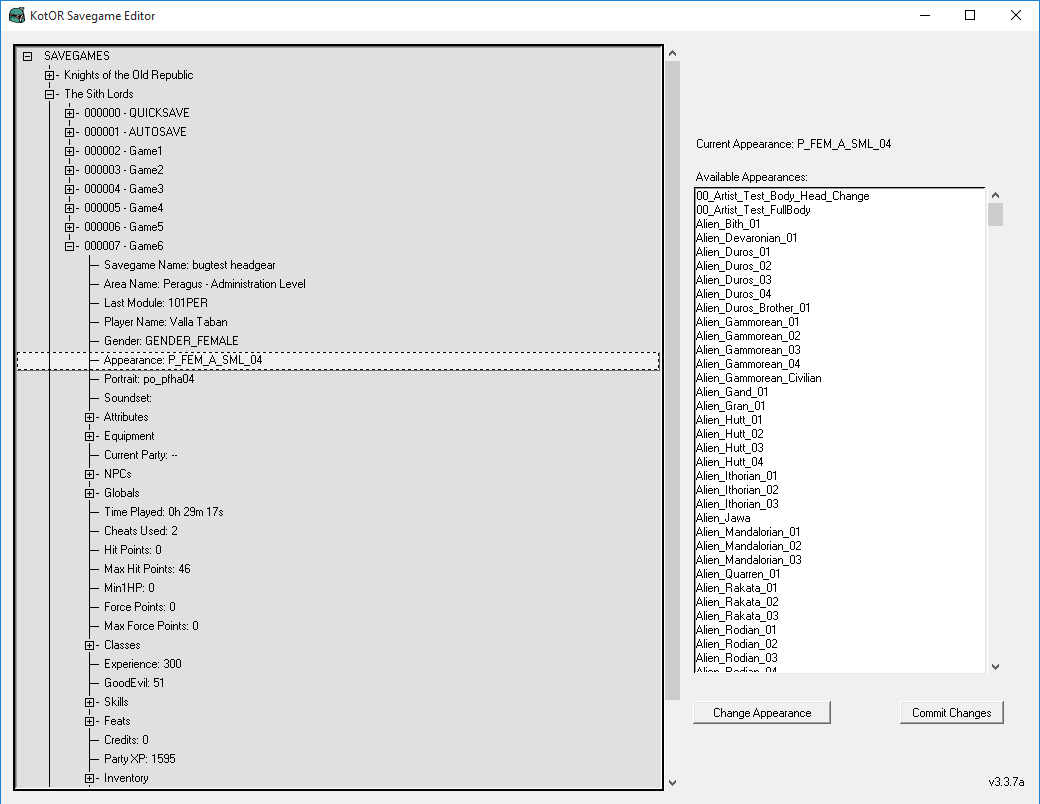 With all the complicated stuff like enabling the console out of the way, you're ready to actually use cheat codes with the console! Cheat codes are typed into the console using your keyboard, and sent by pressing the ENTER key (also known as return). If you're on KOTOR 2, you'll not be able to see what you're typing (because the console is invisible), but commands are still typed with the keyboard and sent with the ENTER key (after pressing your console hotkey).

It's really that simple!

Now you've got to know the basics of cheat codes and the console, check out our cheats list for an entire list of all cheats from KOTOR 1 and KOTOR 2.

Below is a searchable list of all KOTOR cheats and KOTOR 2 cheats, working for the latest version of the games on PC and Mac (Steam and non-Steam versions of the game). Unfortunately, as console commands are only available on desktop editions of the game, these cheat codes will not work on the XBOX or Android editions of Star Wars Knights of the Old Republic.

The console in both editions of KOTOR can be enabled by adding the line EnableCheats=1 to the swkotor.ini (KOTOR I) or swkotor2.ini (KOTOR II) file. If you are having trouble opening or enabling the console, view our comprehesive guide by clicking the button below:

After having enabled the console it can be opened by pressing the ~ (tilde) or ` (grave) keys on your keyboard. In KOTOR II, the console is invisible - pressing the console hotkey will still open the console, but you cannot see it (so press the console button, type a cheat, and hit ENTER to send a command, even though it might seem like you aren't typing into a console window). If those hotkeys aren't opening the console for you, click the button above this paragraph to view our in-depth guide on using the console.

Kotor Save Editor For Mac Os

Click the 'Table View' and 'Card View' buttons to change how commands are displayed. Visit a command's info page to find more documentation and working examples by clicking on its name. Type the name of a command into the search box below to instantly search our complete database of 37 cheats from both KOTOR I and KOTOR II.